Most young soccer players dream about becoming professional footballers and even being the next Tim Cahill or Aaron Mooy for Australia. Ambassadors Soccer Camps recognises this and encourages all young players to embrace the excitement and romance of playing the beautiful game. The reality though, is that very few players ever realise this dream and those that do quickly realise that it takes more than just great skills to make it.

Ambassadors Soccer Camps starts with football – its coaches are players, fans, students, teachers, devotees and advocates of the greatest game on earth – but it also recognises the opportunities football presents to develop character, to teach sportsmanship and to equip young people for the challenges they face on and off the field. That’s a good thing for the ones that don’t make it as professional footballers… and especially good for the ones that do!

Having begun in Bolton, England, in 1991, Ambassadors Soccer Camps are now held in over a dozen countries worldwide, including England, Spain, USA and South Africa. In every country, camps are held in partnership with local Christian churches and include life lessons based on the example and teachings of Jesus, who, even though we have no proof of this, we are pretty sure would have been a footballer himself had it been around back then.

Ambassadors Soccer Camps is an initiative of Ambassadors Football, an international football outreach organisation with over 20 years of experience in youth soccer. The coaching curriculum for the camps was developed by Ambassadors Football’s head coach, John Squires, who holds a UEFA ‘A’ Licence, one of the highest coaching qualifications in the football world, as well as a Masters in Sports Leadership. In 2014, Ambassadors Soccer Camps implemented the FFA National Curriculum at its camps in order to contribute to the vision and direction of football in Australia. 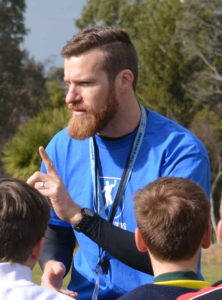 The camps program is overseen in Australia by David Johnston. Having grown up playing football in the western suburbs of Sydney, DJ took to football coaching with great enthusiasm. A qualified Primary School Teacher, he has obtained FFA Junior, Youth and Senior Coaching Licenses as well as the Skills Training Certificate and the FFA/AFC C Licence (Youth). He has coached at youth football programs in the USA, Thailand and South Africa. Now based in Sydney again after a brief stint in Adelaide, DJ is passionate about investing in the next generation of football players through Ambassadors Soccer Camps. DJ leads a team of coaches from around Australia and overseas to deliver high quality football programs at Ambassadors Soccer Camps across NSW and South Australia.

Here are some quotes from real-life parents about our soccer camps:

“My boys had a great time and only had positive things to say. They were enthusiastic each morning to attend and always wanted to stay longer!”

“The Ambassadors Soccer Camp was a great initiative that really helped my child develop his abilities both as a soccer player and a team player. I was especially pleased with the attitude of the coaches and the positive message that the camp delivers.”

“My son had a great time. I was wondering if the camp days would be too long but he enjoyed every minute of it, especially the Friday afternoon competitions and awards ceremony. I was particularly impressed that even though it was a soccer camp that the greater qualities of fairness, honesty and integrity were brought out in every area.”

“It was great it was equal for both girls and boys and extended all levels.”

“I can’t speak highly enough of this camp. It was well organized and professionally run. My 2 boys loved every minute, despite not having played soccer for 3 years. They came home with such a positive attitude every day and focused on what the team had achieved, rather then what they had/hadn’t accomplished. They also loved learning about Jesus, the ultimate team player.”

“Alex has played soccer for 5yrs and has attended many soccer camps in that time, some run by the club and some by soccer nsw. This camp has been the best of all of them. I can’t tell you why, maybe it was the way you ran it where the focus was on team work, the coaches commitment or just the community (parents). The kids had fun, were focused and just loved being there. The two Americans Dana and James just completed the camp, they knew every child, they took an interest in everyone and that each coach took time to congratulate each play.”

“I would love to say thank you so much for the best school holidays that my son has ever had in his life, it was an experience he will never never forget and Dana and James were just amazing guys.”

“From the first day to the last my boys were beaming and excited about their day of soccer. The expressions on my sons faces is not what I had expected as I thought they might have felt “palmed off” by me during the school holidays. I was surprised by their enthusiasm and they have already told me that they want to be involved again next year. Every day my boys came home cheerful and spent which made me feel happy and pleased that I had made the right decision. I think that the nurturing of team work while supporting each child individually during the camp made a big impact on how my sons felt about themselves. I do think you are onto something special and am glad to hear that you will continue the program. All the very best!”